As a field consultant for the last several years, I have been amazed at the numerous deployment scenarios that can be reproduced utilizing just one piece of physical hardware. Due to increasingly expensive electrical bills I trimmed down my server class lab hardware nearly a year ago in favor of a megadesktop that could handle anything I threw at it. While dual-, tri- and quad-boot scenarios have given me the ability of running ESXi, XenServer, Hyper-V, and Windows 7 natively on the hardware, it has been difficult to reproduce complex multi-node hypervisor cluster scenarios without wrangling additional equipment. With the release of VMware Workstation 8 and Nested 64-bit Virtual Machine support, hardware assisted virtualization technologies (Intel-VT/AMD-V) can now be passed through to virtual machines! 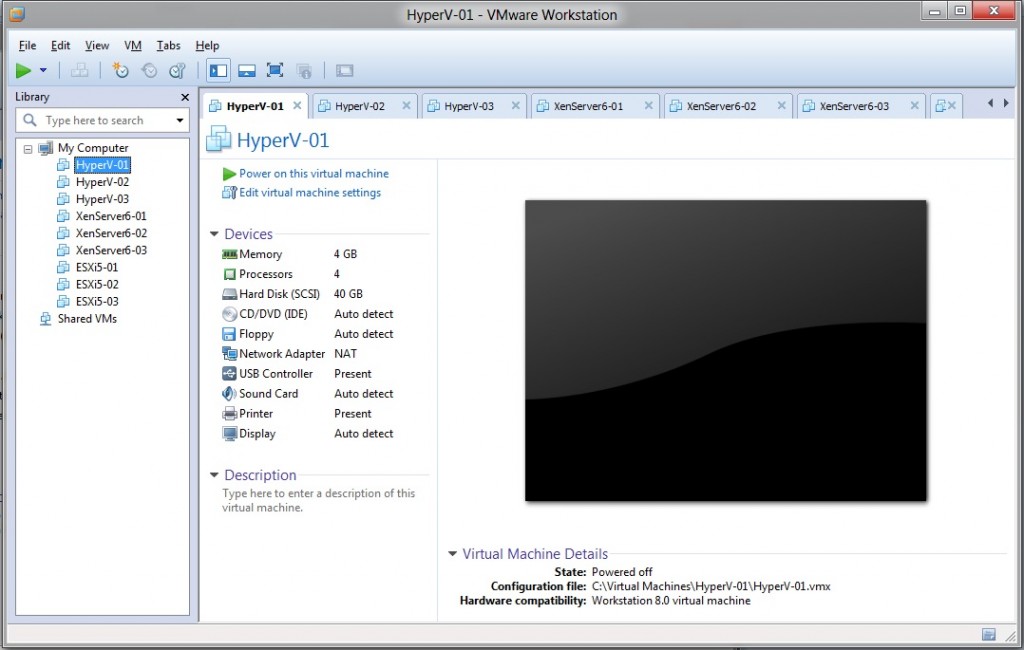 The screenshot above visually demonstrates the power and capabilities to nest Hyper-V R2, XenServer 6, and ESXi 5 directly into VMware workstation to evaluate or reproduce countless deployment scenarios. Attempting to install the Hyper-V role would likely result in the following unrecoverable error: 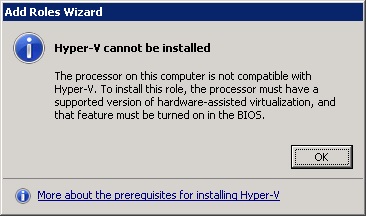 Hyper-V cannot be installed. The processor on this computer is not compatible with Hyper-V. To install this role, the processor must have a supported version of hardware-assisted virtualization, and that feature must be turned on in the BIOS.

Additionally, for Hyper-V, you must modify the VMX file and add the following line:

While XenServer allows you to proceed through the following error, functionality is severely impacted: 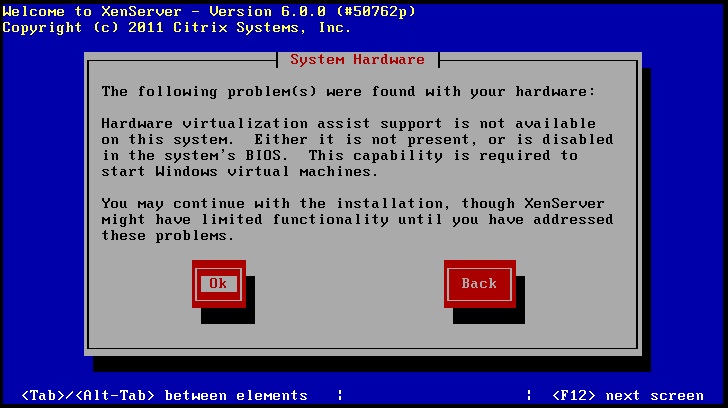 The following problem(s) were found with your hardware: Hardware virtualization assist support is not availabe on this system. Either it is not present, or is disabled in the system's BIOS. This capability is required to start Windows virtual machines. You may continue with the installation, though XenServer might have limited functionality until you have addressed these problems.

Similarly, ESXi allows you to proceed through the following error but will limit you to running only 32-bit virtual machines: 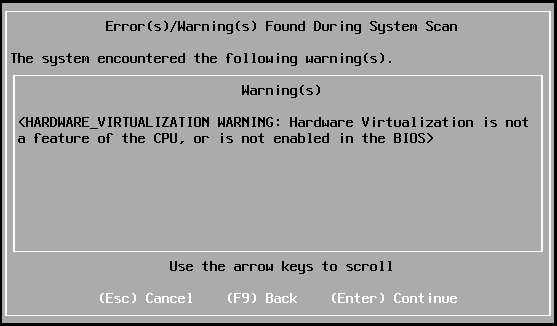 Error(s)/Warning(s) Found During System Scan. The system encountered the following warning(s). Warning(s): HARDWARE_VIRTUALIZATION WARNING: Hardware Virtualization is not a feature of the CPU, or is not enabled in the BIOS

Now that I’ve shown you all of the expected errors, let’s configure VMware Workstation 8 to allow nested 64-bit virtual machines thus resolving all three of the above notifications.

Second, the Virtualize Intel VT-x/EPT or AMD-V/RVI checkbox must be selected within the Virtual Machine Settings. In VMware Workstation, right click the virtual machine and go to Settings. Select the Processors node and check the bottom box on the right hand side: 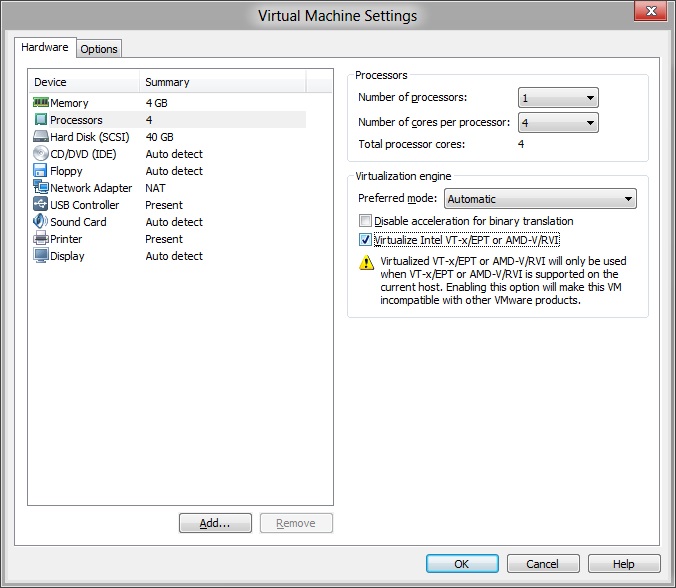 Both options require a shutdown and restart of the virtual machine in order to apply, so it’s highly recommended to perform both changes with the desired virtual machines shutdown. Upon boot, these virtual machines will now support Hypervisor installations within VMware Workstation including support for 64-bit Nested Virtual Machines!

Additional details for setting up 64-bit Nested Virtual Machines within ESXi 5 clusters can be found on the VMware Communities site at http://communities.vmware.com/docs/DOC-8970

Feel free to comment below if you would like any further information on setting up Multi-Node hypervisor clusters nested in VMware Workstation 8. Thanks so much,

Leave a Reply to anto Click here to cancel reply.