Home / Citrix and Atlantis Partner Together to Deliver the First Hyper-Converged Solutions for XenServer 6.5! All-Flash No Less!

Citrix and Atlantis Partner Together to Deliver the First Hyper-Converged Solutions for XenServer 6.5! All-Flash No Less!

Following the heels of the Sanbolic acquisition announcement, today was yet another big day for Citrix in the world of Software Defined Storage! This announcements has more to do with Citrix partnerships, and what they were able to achieve working with one of their longest standing partners in the storage capacity and performance optimization space, Atlantis Computing. This announcement is near and dear to me as I was on staff with Atlantis in August at VMworld when USX 2.0 was launched and awarded Best of VMworld for 2014. Both of these announcements highlight the importance of Software Defined Storage, although from my perspective both are different approaches, address different problems, and at this time there are non-overlapping synergies if both are used together. Of course, I certainly could be wrong. Let me get right to the meat of the announcement:

Today, Atlantis announced the industry’s first hyper-converged infrastructure (HCI) solution built for and supported on Citrix XenServer as the underlying hypervisor. Equally importantly, Atlantis is able to deliver this solution with both traditional local spinning media (SAS, SATA, 7.2k, 10k, 15k) and local all-flash (SAS/SATA SSD, PCIe, Flash on DIMM) just as they have done with USX on VMware vSphere. Of course the existing ILIO models (diskless, disk-backed, etc.) are still available within USX. If you’ve been following the twitter stream recently, you would have seen that USX for XenServer has been coming, I am tremendously excited this is becoming a reality. To read more information on the press release, click here.

For those that have been in the space for some time, you may know that Atlantis’ ILIO product supports all three prevalent hypervisor platforms (vSphere, Hyper-V, XenServer) for Citrix VDI (XenDesktop) and RDSH (XenApp) workloads. Persistent, non-persistent, server-based, you name it, you can do it with ILIO, either entirely in RAM or as a front-end acceleration and capacity reduction tier in front of local or a shared storage array. So, how is USX different? In a couple ways. USX 2.1 has released since I originally wrote the getting started blog post for USX, but if you simply want to see the GUI, you can checkout my blog posts found here. The UI in USX 2.1 is slightly different, but the blog post will do a pretty good job getting you up to speed with the concepts.  Let’s talk about some of the differences and why USX is important, compared to the existing product supported on XenServer, ILIO.

As a true SDS solution, USX enables the emerging tech trend we are seeing in the space known as Hyper-Converged Infrastructure, also commonly called Server SAN. ILIO before USX didn’t have any local storage data replication resiliency characteristics that you might think of when you imagine Server SAN or network based RAID (common in VSA/Server SAN technologies). For data persistence, this meant that if you used disk-backed ILIO with local storage, and that server were to fail, all virtual desktops on that local storage would be effected. Is this a big deal for non-persistent VDI (XenDesktop) or RDSH (XenApp) scenarios? Probably not. Is this a big deal for persistent VDI? Most likely! In the case of USX, there are layers of HA and protection against individual VM or host failures as displayed below:

So, in the case of ILIO on the various platforms, if you wanted to deploy persistent VDI workloads, you still required some form of shared storage to protect against individual server failure (HA protection at the hypervisor to fail over the ILIO). With USX, and the Hyper-Converged Infrastructure use case, this is no longer required. Ultimately this will do three things, specific for Citrix workloads. First, it will lower the barrier to entry for a multiple low-end servers configuration to get started with persistent on XenServer. The press release mentioned an all-flash hyperconverged configuration with a fully loaded cost per desktop of $187. I’ve seen this configuration and the numbers are legit. Pretty impressive when the XenServer hypervisor is not an additional cost for XA/XD! Second, by eliminating the need for SAN, all-flash Server-SAN (HCI) is now a reality, making the user experience and disk performance absolutely mind blowing. This is huge for XenServer as, like it or not, in the US it’s often selected as the hypervisor for cost sensitive TCO/desktop environments. Now things just got that much cheaper. Finally, USX will enable you to deploy all of your Windows Server based infrastructure components (DDCs, StoreFronts, PVS) on the same hypervsior and storage platform architecture as the resource layer, if you choose.

This is exciting for a couple of reasons, but one of the big areas for me is that I feel Citrix has finally resolved a lot of architectural issues with XenServer that were holding it back from being a long term viable option for many customers, namely 32-bit Dom0 architecture and baggage that came along with that. If you’ve been following XenServer release timelines, you probably know that XenServer 6.5 is right around the corner, with the Release Candidate (Project Creedence) available for download here. I have played quite a bit with Creedence betas and the RC, and it’s pretty darn good! Performance is better than I’ve ever seen with XenServer and the code quality seems to be on par. Additionally, Citrix and ISV partners continue to double-down on their investments in innovative niche categories for XenServer, NVIDIA GRID vGPU as a perfect example. With vGPU and GPU pass-through addressing the rich user experience elements and Atlantis USX addressing the high storage demands that often accompany that, it seems there could be no better solution! Below is a visual showing the complete USX solution stack and all the bells and whistles that come along with this platform. From my perspective the most important elements from an intellectual property and patent perspective are the HyperDup Content-Aware Data Services (Deduplication, Compression, Caching, Coalescing, etc.). All of these features and functionality characteristics should port nicely to XenServer when released just as they’re available on VMware vSphere today. More importantly, this will make XenServer and USX a viable platform for many other server workload use cases outside of just XenApp/XenDesktop!

Updated: Since the time of drafting this, XenServer 6.5 has released to web! See the full press release here. 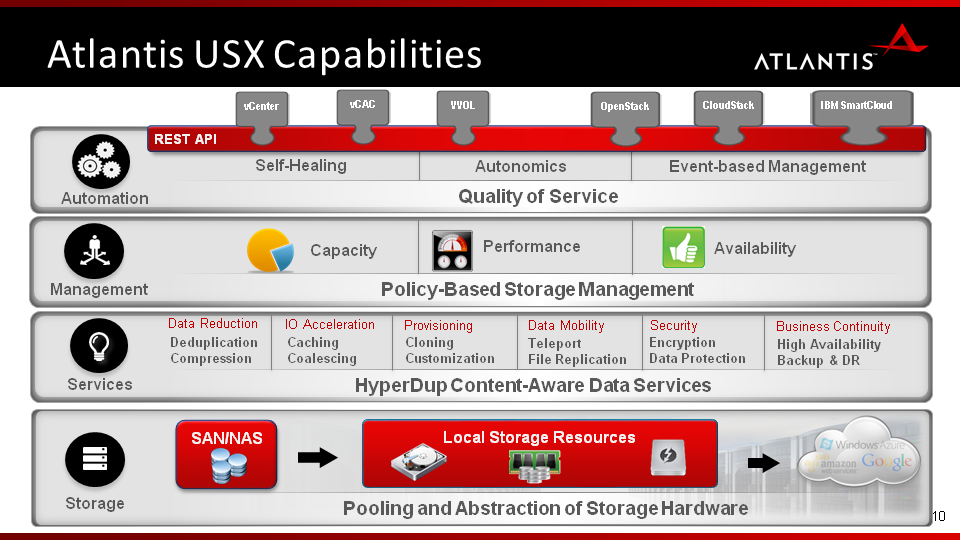 Do you see the value for Citrix environments? What about outside of the core XenApp/XenDesktop use cases? XenMobile, ShareFile, CloudPlatform, other products? Seems like a perfectly natural fit given their long standing company relationships. What about non-Citrix products, for Service Providers for example? I’m definitely interested to hear your thoughts! Feel free to hit me up on twitter or leave a comment below if you have any thoughts or questions on how Atlantis Software Defined Storage technologies work.

Hot off the Presses: Citrix Acquires Sanbolic, Creators of Melio FS. What’s Next?
XenServer 6.5 Dynamic Memory and NVIDIA GRID vGPU? Now Fixed in 6.5! Go For It!