Hot off the Presses: Citrix Acquires Sanbolic, Creators of Melio FS. What’s Next?

The news is out! Citrix has acquired Boston based Software Defined Storage (SDS) company Sanbolic. Click here to read the full press release.

Several months back Eva Helan (Co-founder, president and COO of Sanbolic) put me in touch and I had a call with fellow geek Andy Melmed (VP, Enterprise Architecture). Folks who have been in the Citrix space a while know Andy, but this was my first time chatting with him. Among other things, Andy told me a little bit about his history of working at Ardence (pre-Citrix acquisition) and later on the ISV certification team at Citrix (i.e. Citrix Ready). For those that aren’t familiar, Ardence was the company that became the technology that many of us know and love as Citrix Provisioning Services.

He then joined Citrix by virtue of acquisition and during his time at Citrix, Andy worked with many partners including Sanbolic that had a very unique solution (Melio FS at the time) to solve the Citrix Provisioning Services vDisk storage problem. He eventually left Citrix to go work for Sanbolic as their technology was so unique to the Provisioning Services story, he wanted to be part of the team. To make a long story short, Andy proceeded to inform me of the ways in which Sanbolic was evolving their intellectual properties. Looks like Andy is now part of the infamous Citrix boomerang club! Both times by virtue of acquisition.

For years, the core of the Sanbolic technology was an advanced, 64-bit symmetrical cluster file system called Melio FS that provides multiple Windows servers with simultaneous read/write access to one or more storage partitions or Logical Unit Numbers (LUNs) on a storage area network (SAN). 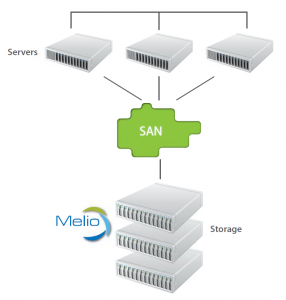 While this had a fit in many different areas (SQL or App Clustering), we most often saw Melio FS positioned and most useful in Citrix Provisioning Services deployments as it made the difficult task of vDisk storage management rather trivial.  If desired, customers could even use Melio FS and create multi-datacenter or global replication vDisk store for PVS. Many customers today use DFS-R for this capability.  Sanbolic’s approach to this was always rather unique, sitting above the physical and virtual layers, as software within the Windows Operating System, eliminating the need for hardware HCLs.

With all this SDS and storage converged goodness, the real question that must be asked is, “What does Citrix want with Sanbolic? Why did they make the acquisition?“

Any speculations of what Citrix will do with the technology? I’d love to hear your thoughts! Many of us have already started this discussion at Citrix Summit (partner event in Las Vegas) and will continue discussing via blogs and twitter. If you have any thoughts on the matter, I’d love to hear what you think. Do you think Citrix is going to use this technology to advance server-SAN and compete with VMware VSAN for their VDI/SBC platforms? Does this pose a thread to existing Citrix partners who offer similar solutions? Will Citrix use this technology higher up the stack, and if so what use cases other than PVS would be a fit for such a technology?

If you want to share your thoughts and ideas, please feel free to use the comments section below. Otherwise, feel free to drop me a note or find me on Twitter.

XenServer 6.2 Dynamic Memory and NVIDIA GRID vGPU, Don’t Do It!
Citrix and Atlantis Partner Together to Deliver the First Hyper-Converged Solutions for XenServer 6.5! All-Flash No Less!